Skip to content
Home » Personal/Opinion » Comfort is a Trap, Don’t Fall for It

We recently did an interview for ZO Magazine and one of the questions was, “If you had to pick a notable underdog to create an official Dancake out of that best represents your particular origin story, which would it be and why?”.

What follows below is an expounded version of my answer:

Purpose is a welcome curse. A spell cast upon you that gives you a drive and ambition to achieve something. It permeates your thoughts and informs nearly every decision you make. You invest money and time into planting seeds that may never bloom, and if they don’t, you go back and do it all over again. It’s a madness, and that mania makes very little sense in the actual scheme of things. And for a very select few of us those investments eventually bear fruit, a vocal minority we all look at to inspire us to achieve the same purpose that they have.

The truth is that I don’t really know. Purpose isn’t divine, no one can or will give it to you, if you ever discover a purpose it will be one that you’ve conjured up for yourself. Which is probably why a lot of us come to the same conclusions, we all want to be actors, musicians, singers, artists, directors, the next Steve Jobs or Lord knows what else. So many of us are all entering the same sweepstakes, and the more people enter the less likely it is you’ll win. It’s all so illogical and so very obviously human.

Purpose is also fluid, it changes with time, just as we do. It’s informed by our failures and successes. I’ve traveled through many phases of purpose in my life until I landed on the current one, which is music. As unsuccessful as it’s been I’ve never wavered from that purpose since I discovered that it was all that I wanted (to make a living playing/creating music). It’s the thing that’s driven me to success in other aspects of my life (aka Telecommunications and now Pancake Art), simply because that success can and has fed the perpetually hungry beast that is music.

One of those phases in my life was that of an avid golfer, which seems to always illicit strange looks and confusion when I tell people. I guess I don’t possess what they would assume to be the “aura” of a golfer. Assumptions be damned though, I was obsessed, I was in love. My parents didn’t have money, but I still hit the course 3-5 times a week with my yard sale clubs and my junior pass at the cheapest public courses Central Illinois had to offer. I aspired to become a professional golfer for many many years, unfortunately all of my enthusiasm and constant play never amounted to enough skill to even land on a mediocre college team. Nor did I want to at that point, by the time I made it to college the game of golf had moved into the category of hobbies and music had moved succinctly into the category of purpose.

However, there is something, or rather someone that I carried with me into my new purpose. Inspiration doesn’t have to be an insular thing, it can come from anywhere or anyone, and in this instance that continued inspiration comes from one the greatest and hardest working golfers of all time, Ben Hogan.

So, how exactly does a golfer inspire a musician? How do you draw the line that connects the two? The simple answer is that he was more than happy to endure the grind to achieve greatness, no one worked harder or practiced longer than Ben Hogan. He was not supposed to be the greatest golfer in the world, he didn’t even win his first tournament until nearly a decade into his professional career. He loved the game so much that rather than accepting what was already an exceptional and elite skill set (he was a professional after all), he demanded more of himself and spent his entire life analyzing, tweaking and practicing to achieve it.

“Every day that I missed practicing takes me one day longer to be good.”

It’s not totally analogues to my life as a musician or an artist in general. I’ve never aspired to become a virtuoso player, but not everything about creating music is a carefree and purely artistic adventure, a lot of it is just hard work. Writing a song is almost the easiest part of the process. Everything that comes after is the grind to see it to fruition.

Ben Hogan was never afraid of the grind, in fact he craved it. He woke up in the morning looking forward to finding ways to improve his swing and become better than he was the day before. I can’t say that I always share that enthusiasm, but looking to him can be a helpful reminder that the grind is far more important than the inspiration. Inspiration is spark that starts the engine, but it needs fuel to reach it’s destination, and that fuel is the grind.

“Reverse every natural instinct and do the opposite of what you are inclined to do, and you will probably come very close to having a perfect golf swing.”

Comfort is a trap, don’t fall for it. If your creativity is a plant, comfort is a shady tree, if you spend all of your time there eventually your creativity is going to whither away and die. Discomfort is the sun, it is the rain your creativity needs to grow. The older you get the easier it is to rest in that shade, you’ve got an entire lifetime of experiences hovering over you. That’s the grind, that’s the work, the strive to live an uncomfortable life so you can bloom a new flower that you’ve never seen before.

Ben Hogan’s career, and life was nearly ended in 1949 when a his car collided with a Greyhound Bus. His wife was in the passenger seat, and he laid his body in front of her in hopes of at least saving her life. Karmically enough this moment of selflessness saved his own life as well, as the steering column of the car was pushed into the drivers seat by the collision.

What was left of Ben Hogan’s Car after the accident.

“This accident left Hogan, age 36, with a double-fracture of the pelvis, a fractured collar bone, a left ankle fracture, a chipped rib, and near-fatal blood clots, he would suffer lifelong circulation problems and other physical limitations. His doctors said he might never walk again, let alone play golf competitively. While Hogan was in the hospital, his life was endangered by a blood clot problem that led doctors to tie off the vena cava. Hogan left the hospital on April 1, 59 days after the accident.”

Despite his extensive injuries he manage to return to competitive play after 11 months. Only playing in 5 tournaments, but winning 3 of them. His body was never the same, it never allowed him to play as often as most other professional golfers and it most likely prevented him from becoming the greatest golfer of all time instead of just one of them. But considering that his doctors told him he may never walk again, I’d say the love of the grind and the purpose he had found pulled him back onto his feet and kept him swinging.

“The most important shot in golf is the next one.” 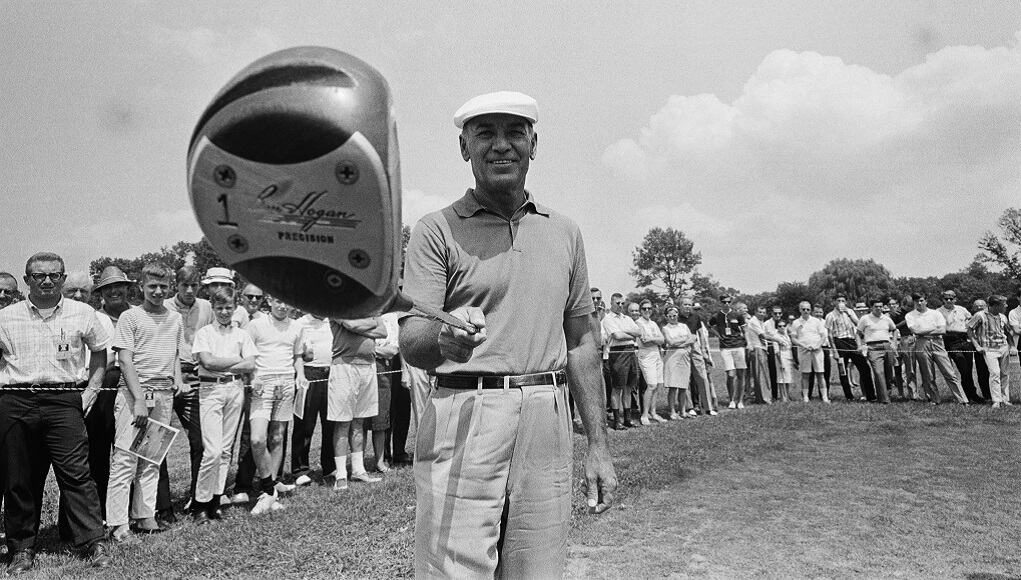