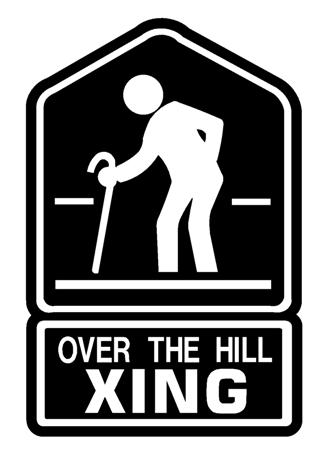 I’ll be putting this sign up in the studio as soon as I figure out how to get these tennis balls on my walker.

While acknowledging that several of my cohorts have been over 30 for years, this is the first time that *I’VE* been thirty so I’m gonna blog about it.

It’s significant, right? The decade. We think about our lives in terms of decades, even if, like, time is a flat circle construct illusion, man. I’m a person in their 30s. Am I a man now? How do you know?

My decade has been a wild one. To think that I started out as a fry cook, a position that would directly lead to an international entertainment career. The internet is a magical thing! It’s…still weird to think about. I mostly don’t think about it.

But here I am! Lemme think for a minute.

I got out of high school with absolutely no idea what I was gonna do. I kinda wanted to be a rock star, to create an awesome band with my best friend and tour the world. I got married when I was 20 to someone who definitely didn’t want to be married to a rock star. It wasn’t a great match.

My 20s were a wild time. Haha, I can say that now. I made a lot of silly mistakes. But y’know what? I don’t think I regret any of them. I learned a lot in my 20s. I learned, for one thing, how capable I am of petulant crappiness. I learned how to use music software and illustrator. I learned about how bitcoin works.

But, I think the best lesson I learned was how to listen well. That’s a tough one for a lot of young guys. Our society (the one we live in) doesn’t seem to put enough emphasis on empathy, emotional intelligence, and boundaries. We don’t seem too concerned with teaching kids how to talk about their feelings. At least, that’s how it seems looking back on my own childhood. When I finally figured that out it dramatically improved my quality of life. My relationships were suffering for a while and I didn’t understand why. I feel like I do now. I’m grateful for that.

I started working on my most ambitious project ever, Anthromancer, about 5 years ago. We failed a kickstarter for it about 2 years ago. That stung! But I’m glad it failed, because we weren’t ready. I’ve made Anthromancer a whole lot better know. I’m presently in the process of reviewing the video for our next attempt to launch on KS, which I am a lot more confident will succeed.

Wow, I failed 2 kickstarters in my 20s! The Dancakes Van was the first one. We were so not ready for that. It’s a massive blessing that project failed when it did; we would’ve bungled the hell out of it. Hank and I tried to make the Dancakes Van happen right after my Today Show appearance in 2013; I felt like I had to capitalize on the momentum, like if I didn’t I was gonna be trapped as a frycook for decades. But we had no idea what we were doing! We had no idea what the business model should look like, how to draw good portraits, and I didn’t even know what residential griddle to use.

I’d have laughed, and asked if you wanted fries with your burger.

I really believe that my life is stranger than fiction. Pancake art. Pancake art! What? It boggles the mind.

I could honestly write about this stuff for ages, but I’ll have to save it for a book. For now, here’s to the next 10 years. I hope they’re full of awesome experiences and fulfilling lessons.